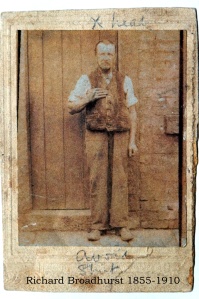 Richard BROADHURST was born in 1855 in Hale, Cheshire. He is the son of John and Frances Adshead BROADHURST.  On 19 June 1876, at about 21 years old, Richard Broadhurst married 15 year old Sarah Ann Jones (b.1861 Wilmslow) at St. Mary’s in Bowdon, Cheshire, a village just west of Hale and 1 mile south of Altrincham. Richard and Sarah Ann had eleven known children:

1881 Census. By 1881, Richard and Sarah Ann lived at 68 Manor Road in Altrincham in St. John’s parish. Altrincham is less than two miles NNE of Bowdon. Richard had left the farm and was working as a Bricklayer’s laborer. Along with Richard and Sarah Ann the household included daughters Frances M. and Jane Ann as well as Richard’s 70 year old mother, Frances, and 69 year old father, John.

It’s likely Richard and Sarah Ann lived in Leigh, Lancashire around 1882-1888 as they had four children born here during this period; Sarah, John Richard, Gertrude and Mary.

1891 Census. By 1891, Richard had moved his family about 18 miles east-northeast to 2 Spadescroft, Crompton, Lancashire, where he returned to work on a farm as a farm laborer. Crompton was a cotton mill town and Fannie and Annie, 14 and 12, worked in a mill. Richard and Sarah Ann had two more children by this time; Peter Ernest and Nellie.

1901 Census. During the 1901 census Richard’s family had moved about 5 miles west and lived at 1 Peel Street in Heywood, Lancashire. By this time Richard and Sarah Ann had three more children; Violet, Percy and William Arthur. By this time Fannie and Sarah had left home while Annie, John Richard and Gertrude were at home and all worked in cotton mills.

To America – 1923. On 22 October 1923, the family of Nellie (nee Broadhurst), William Thomas and May HOWORTH set sail aboard the S.S. Megantic from Liverpool, England. With them is Nellie’s mother, Sarah Ann BROADHURST now a widow and listed at 5′-2″ tall with grey hair and grey eyes. It is the first time to America for all of the party and they all declare their intent to become US citizens. They arrive into Boston on November 1st. They are headed to Utica, New York and the home of Arthur and Gertrude ADAMS nee Broadhurst at 543 Main Street.

Richard and Sarah Ann Deaths. About 12 miles north-northwest from Heywood, Richard BROADHURST died Monday 19 July 1910 at the age of 58 at 7 Colliers Row, Oswaldtwistle, Blackburn. His death certificate states: “Heart failure accelerated by injuries received on the 18th of June whilst riding his bicycle by coming into collision with another cyclist.” The deadly bicycle accident occurred in Haslingden, Lancashire Cheshire, about 4 miles from Oswaldtwistle. Richard’s oldest daughter Frances M Crossley nee Broadhurst lived in Haslingden. Richard was buried in the Blackburn Cemetery on Saturday 23 July 1910.