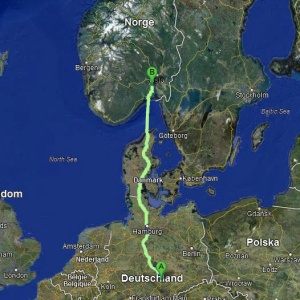 When it comes to understanding family history and the motivating “why” a family member leaves his home country for another it’s often left an unsolvable mystery. Seeking better economic times is often the spark. Fleeing religious persecution or military conscription gets people moving in huge numbers as well. Love? Maybe.

So what could have driven Christian Ritter, a single 25 year-old Evangelical Lutheran (presumably with the Ritter Mystery Cup in tow) to move away in 1863?

Economics? He and his family owned the Neuerbeműhle, generally called “die Schneideműhle”, from 1805 to 1862. His uncle and grandfather other mills in the area as well.

Politics? The year before, in 1862 Otto von Bismarck, a  Pietist Lutheran, was named Prussa’s Minister-President and Foreign Minister by King Wilhelm I which was the beginning (or escalation?) of much political and military turmoil throughout the region.

Love? We do know that by Novemeber 1864 he lives in Holmestrand, Norway. A town in that Lutheran country just under 700 miles almost due north from his former home in Erfurt, German. He married an Erfurt girl on November 15, 1864.

Who knows why he left? It’s another mystery.

The next record for Christian turns up in the 1865 Norway Census where he is listed along with his new wife Sophie and daughter, Doris. Doris, born that census year, was “my” Grandma Schwarz. In the same household are Sophie’s younger brother–he was about 24 at the time–Herman Knick and 15 year-old maid Josephine Syversen. They live on Langgaden Street, perhaps number 88, in Holmestrand.

The family would stay in Norway for about 4 years and then it’s On to America!